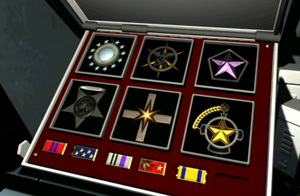 A complete medal case (as the game doesn't save post-Borodin, the sixth ribbon cannot be seen)

This campaign medal is awarded for the long and desperate retreat of the fleeing Alliance vessels scattered across the Solar system after the initial Coalition attack. The 45th Squadron plays a vital role in protecting these escaping vessels, both milltary and civilian, as they head for the relative safety of the Alliance's new Command base, and rallying point, at Triton Neptune's largest moon.

The 45th and the Reliant continue their operations to escort and protect incoming vessels to the relative safety of the Alliance's rallying point around Triton. However, their actions have been expanded to hit-and-run missions on Coalition military targets. The campaign medal is awarded for weakening Coalition forward hunting packs in an effort to fend off any attempts to strike the new Alliance Command base.

The secondary objective of this campaign is to attack strategic Coalition targets and secure much needed supplies and technologies for the Alliance by raiding enemy bases and facilities. The 45th's reputation begins to grow and they become known as "The Flying Tigers." During this campaign, the 45th Squadron plays its part in disrupting the development of the Coalition Warp Gate facilities as well as a super carrier construction base. The Flying Tigers also manage to secure coding and warp technology, which will later enable the Alliance to hit-back at the Coalition.

Having failed to annihilate the Alliance with its hunting packs. Coalition forces withdraw to the quadrants around Titan in order to regroup. However, the Coalition has developed an Advanced Warp Gate facility to ambush Alliance vessels from long-range

Alliance forces still operating between Neptune and Saturn have been able to regroup much of their remaining military strength and resources over the last two campaigns. Here, the Alliance begins the first phase of their counter attack, and prepares for the liberation of Titan The campaign medal is awarded for destroying the Coalition's Advance Warp Gate facility. Additional objectives include mounting surprise attacks and ambushes to weaken the Coalition's forward fleet around Titan

This campaign medal is awarded for the capture of Admiral Kulov, the first Coalition Admiral to be apprehended by the Alliance. It is hoped that information from Kulov will help secure Titan's early liberation. The destruction of the Coalition Ion Cannon--that threatened the Alliance's advance to free Titan-allows the dropping of troops to the planetary surface. The land war for the liberation of Titan has begun

The operations in this campaign involve the tracking and destruction of the 2nd Coalition forward fleet as it tries to reinforce its ground troops. Alliance forces prevail and drop troops, finally securing Titan.

The campaign never places you in the quarters after the final mission, so the design of the ribbon cannot be seen under normal circumstances. It also has no description in the game's files, but can be assumed to a medal for Victory in Outer Sol.

The ribbon has been reconstructed from partially extracted sprites. Best guess was used as to the colors.

Medals are awarded for specific acts of heroism, often involving a mission's bonus objectives Acquiring the valor medals requires elite piloting skills and a focused obedience to the mission objectives

Received for the destruction of the CS Czar super carrier while in its final stages of completion in a surprise attack and safely bringing back a combat team with captured Coalition information stolen from the Czar's docking facility.

Awarded for completing a secret long-range operation where the 45th destroys both an advanced Coalition Warp Gate and research facility. The condition for receiving the medal is destroying the Coalition carrier CS Krasny by disabling the warp gate before it can warp in.

Awarded for the rescue of Klaus Steiner, the Alliance's premier ace, from the Coalition prison ship, Saladin. During the attack and rescue the player destroys and kills Kariq Madiz, a known Coalition ace protecting the Saladin.

Received for the destruction of the carrier CS Pukov and its onboard fighter squadron, the Black Guard, in a set-piece battle with the Yamato. The Black Guard and CS Pukov have been the principal enemies of the Alliance fleet since the opening days of the conflict.