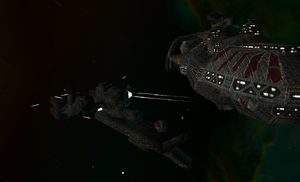 The Western Alliance fleet is composed of a variety of designs originating in all of its member nations. Although the lack of unification and standardization is a detriment for logistics, it also gives the Alliance a flexibility unmatched by the standard, universal designs of the Coalition.

Following the Deimos Betrayal at the beginning of The Sol War, this industrial output coupled with Alliance losses resulted in a temporary numeric superiority between 3 and 2 to 1 in the Coalition's favor.

Alliance capital ships are high priority targets for Coalition torpedo bombers and as such are frequently in need of protection. Capital ships are distinguished by the prefix ANS: Alliance Naval Ship.[1]

Forts are large spaceborne installations designed to serve as repair and refit stations for Alliance fleets. They also provide housing for pilots and other personnel, as well as command and control capabilities.